http://www.thecanadiancharger.com:80/page.php?id=5&a=554
Barrie Trower, a physicist and former British Secret Service Microwave Weapons Specialist, said he came out of retirement because microwave technology that was used for weapons is now being used in schools. Speaking at the  University of Toronto recently, Mr. Trower said he refuses all gifts and all money; consequently he tells it “exactly as it is.”He said there is a lot of proof that microwave radiation used for cell phones and WiFi is harmful and governments have known this for many years.
“Your government (Canadian) is one of the world leaders in microwave radiation research. The U.S. joined Canada in conducting research … The first symptoms of microwave sickness were documented in 1932.” He added that there are 13 secret code names of microwave radiation research used by Canada, the U.S. and Britain. Research results show that lung damage, destroyed brain cells and damage to the blood brain barrier are among a litany of ill effects of prolonged exposure to low levels of microwave radiation; and children are the most susceptible because their cells are close to the size of the microwaves. Mr. Trower said this means children act as antennae for the microwaves. “Children are not small adults. Their systems have not yet formed. It takes a few years for the blood brain barrier to form. It’s like a fish net that surrounds the brain and keeps toxins out (of the brain). Microwave radiation makes the wholes (in the blood brain barrier) bigger so toxins leak into the brain. This can cause psychiatric problems.” 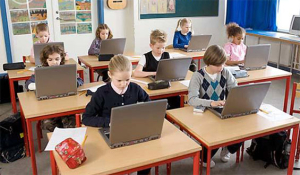 Auditory hallucinations that make people think they’re hearing sounds, fatigue, difficulty concentrating, sleeplessness and irritability are among the symptoms of blood brain barrier damage researchers have documented. Damage to the immune system, which takes 18 years to develop in children, is another effect of exposure to microwave radiation Mr. Trower cites. He also said we have electric cables in our bodies, formed by mile long, inch thick sheets of layers of proteins, that take 22 years to develop in children; and microwave radiation affects the protein synthesis. Mr. Trower said there isn’t a school in the world that hasn’t seen an increase in aggression and other bad behavior when WiFi was introduced.
He cites paranoia, hallucinations, suicidal tendencies and inability to make decisions, among the deleterious effects of exposure to low levels of microwave radiation. Then he gave an explanation for why little is being done about this issue. “By 1971 we knew everything that needed to be known. This document (a 1976 summary of U.S. Defense intelligence agencies’ research) is the saddest most despicable document ever published in history. Lack of concentration, menstrual disorders, headaches and irritability are some of the effects of exposure to microwaves, listed in this document,” Mr. Trower said, followed by this statement: ‘This should be kept secret to preserve industrial profit.’ “He added that as far back as the 1950’s profit was deemed what needed protection, not people’s health. “In the 1950’s researchers conducted experiments on the effects of microwave radiation. Their report contained this statement: ‘If this paper becomes known around the world, it will threaten military and commercial investments.’”
Remarkably, the European Parliament has decided that it can’t even trust the World Health Organization’s (WHO) guidelines for acceptable levels of microwave radiation. Mr. Trower said the European Parliament wrote to its 27 countries urging them to ignore WHO guidelines and set exposure limits at lower levels. And what was the WHO’s response? “The WHO said they will not comment on microwave radiation effects on people until 2015, when it will be able to establish effects on human beings. They are watching people to see how many will become sick. We’re being experimented upon.” He added that the WHO only began studying microwave radiation effects on children in 2009 and it said it won’t be able to comment until 2020. Meanwhile, Mr. Trower said Russia is banning any children under 18 from microwave exposure, when possible, and Britain said children under 12 should have no microwave radiation exposure at all.
This is in the wake of reports made to the British parliament detailing the cases of 11 children under 11 years old who have leukemia. Mr. Trower said this is how the government responded: “The minister said we’re within international guidelines and sat down. This happened four times.” However, as a result of research that documents the harmful effects of microwave radiation on fetuses, the British government said that pregnant women must not be exposed to microwave radiation. “The head of the fetus has multiple connections going on in the brain of the fetus. Microwave radiation gives the fetus an innumerable amount of electrical shocks. This can cause brain blood barrier damage that can result in severe psychiatric disorders later in life.” And this is but one of a number of risks to fetus development microwave radiation causes. “It’s a serious thing, even low levels of microwave radiation,” Mr.
Trower said. “It affects ovarian follicles and eggs. It can damage genes and eggs and the damage is irreparable. Generations will carry genetic defects. It’s threatening the health of future generations, so it must never be put in schools.” He said there is no known safe level of microwave radiation for a child. “No scientist in the world has published a safe level for a child.”
By emfprotection|April 28th, 2016|Categories: Cell Phone Radiation, Microwave Radiation|Tags: cell phone radiation, dangers of wi-fi, Electromagnetic Fields, emf, EMF Protection, wifi radiation, Wireless Radiation|0 Comments