By Dr. Mercola – Originally posted at on mercola.com

If you think the jury’s still out on whether cell phones can be dangerous to your health, then you might want to take the time to listen to this video from the Environmental Health Trust (www.ehtrust.org). Dr. Devra Davis, author of “Disconnect–The Truth About Cellphone Radiation,” has been researching the safety hazards of radiation emanating from your cell phone.

Like many people, Dr. Davis just didn’t believe the possibility of cell phones being dangerous―until she studied it. And now, with the toxicological and epidemiological evidence to back up her claims, she’s trying to get the word out that cell phone radiation is not only dangerous, but can be downright lethal.

In her lecture, Dr. Davis explains how the biological impact of your cell phone isnot related to its power, which is quite weak, but rather to the erratic nature of its signal and its ability to disrupt resonance and interfere with DNA repair. This is now believed to be the most plausible theory for understanding the wide array of health impacts discovered, which includes cancer…

Can Your Cell Phone Cause Cancer?

One interesting case that can serve as an illustrative warning of the cancer-causing potential of cell phones is that of a young woman with no other predisposing risk factors for cancer who came down with multi-focal breast cancer. The case was revealed in the May issue of the Environmental Health Trust’s newsletteri.  As it turns out, the young lady had the curious habit of tucking her cell phone into her bra…

Two cancer specialists, Robert Nagourney and John West, concluded there was only one other possibility that might have directly contributed to her breast cancer. “We connected the dots,” the patient said. And the dots―quite literally the pattern of the cancer, and distribution of the cancerous cells―lined up perfectly with the shape of her cell phone.

While her doctor can’t prove the cell phone caused her cancer, it should serve as a potent warning not only to other women who might tuck their phones in their bras, but also to those of you who keep your phones in your pants pocket or shirt pocket as well. As a general rule, you’ll want to avoid carrying your phone anywhere on your body. Keep in mind that the most dangerous place to be, in terms of radiation exposure, is within about six inches of the emitting antenna. You do not want any part of your body within that proximity.

Regardless of the area exposed to the continuous radiation emitted by your cell phone, there’s the potential for harm, although certain areas are clearly more vulnerable than others.

For example, research published in 2009 showed evidence that wearing a cell phone on your hip may weaken an area of your pelvisii. Using an X-ray technique used in the diagnosis and monitoring of patients with osteoporosis, researchers measured pelvic bone density in 150 men who regularly carried their cell phones attached to their belts. The men carried their phones for an average of 15 hours each day, and had used cell phones for an average of six years. The researchers found that bone mineral density was lowered on the side of the pelvis where the mobile phones were carried, raising the possibility that bone density could be adversely affected by the electromagnetic fields emitted by cell phones.

It’s important to realize that as long as your cell phone is on, it emits radiation intermittently, even when you are not actually making a call. So wearing a cell phone on your hip for 15 hours a day is giving that area of your body nearly continuous radiation exposure.

Previous studies have found that cell phone radiation can affect men’s sperm count, and the quality and motility of their sperm, and this may be a far greater issue than its effect on bone density. One such study, published in PLoS Oneiiifound that:

“RF-EMR in both the power density and frequency range of mobile phones enhances mitochondrial reactive oxygen species generation by human spermatozoa, decreasing the motility and vitality of these cells while stimulating DNA base adduct formation and, ultimately DNA fragmentation. These findings have clear implications for the safety of extensive mobile phone use by males of reproductive age, potentially affecting both their fertility and the health and wellbeing of their offspring.”

Men in particular may want to reconsider carrying their cell phones on their belts or in their pocket, in close proximity of their reproductive organs. In addition, you have a number of other sensitive organs in that general area, including liver, kidneys, colon and bladder—all of which are susceptible to radiation.

That same year, Dr. Siegal Sadetzki, the principal investigator of a 2008 study, testified at a U.S. Senate Hearing that cell phones were identified as a contributor to salivary gland tumors. The report states that your risk of getting a parotid tumor on the same side of your head that you use for listening to the mobile phone increases by:

Cell phone subscriptions are now estimated at 5.9 billion globallyv—that’s 87 percent of the world population! I think it’s safe to say, we’ve already passed the point of no return when it comes to this technology. But as cell phone use continues to grow unabated, a growing body of researchers is speaking out against the technology, warning that it may have serious biological side effects that must be acknowledged and remedied.

Fortunately, their warnings are slowly but surely beginning to be heard.

On May 31, 2011, the World Health Organization (WHO)/International Agency for Research on Cancer (IARC) issued a report admitting cell phones might indeed cause cancer, classifying radiofrequency electromagnetic fields as “possibly carcinogenic to humans” (Class 2B)vi. The classification came in part in response to research showing wireless telephones increase the risk for brain cancer.

According to the press releaseii:

“Dr Jonathan Samet (University of Southern California, USA), overall Chairman of the Working Group, indicated that “the evidence, while still accumulating, is strong enough to support a conclusion and the 2B classification. The conclusion means that there could be some risk, and therefore we need to keep a close watch for a link between cell phones and cancer risk.”

“Given the potential consequences for public health of this classification and findings,” said IARC Director Christopher Wild, “it is important that additional research be conducted into the long‐term, heavy use of mobile phones. Pending the availability of such information, it is important to take pragmatic measures to reduce exposure such as hands‐free devices or texting.”

Children are at Greatest Risk—Including While in Utero

Sadly, children and teens are at greatest risk—both for parotid gland tumors and brain tumors—as their thinner skull bones allow for greater penetration of cell phone radiation. The radiation can enter all the way into their midbrain, where tumors are more deadly. In addition, children’s cells reproduce more quickly, so they’re more susceptible to aggressive cell growth. Children also face a far greater lifetime exposure. According to Professor Lennart Hardell of Sweden, those who begin using cell phones heavily as teenagers have 4 to 5 times more brain cancer as young adults!

The following image, from the book Public Health SOS: The Shadow Side of the Wireless Revolution, clearly shows the differences in depth of penetration between adults and young children. 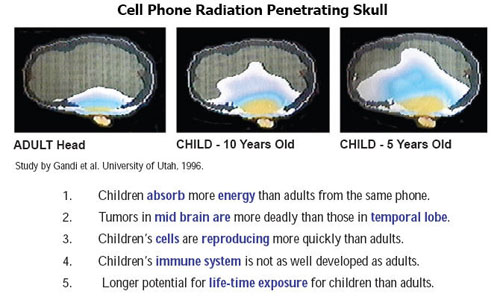 Pregnant women would also be wise to avoid cell phones as much as possible. In 2008, researchers analyzed data from nearly 13,000 children and found that exposure to cell phones while in the womb, and also during childhood, were linked to behavioral difficulties.viii Using handsets just two or three times a day during pregnancy was enough to raise the risk of their babies developing hyperactivity and difficulties with conduct, emotions, and relationships by the time they reached school age—and the risk became even greater if the children also used the phones themselves before the age of seven.

Overall, the study revealed that mothers who used mobile phones were 54 percent more likely to have children with behavioral problems. Later on, when the children began using cell phones themselves, they were:

Experts in the area of the biological effects of electromagnetic frequencies (EMF) and wireless technologies believe there’s virtually no doubt that cell phones and related gadgets are capable of causing not only cancer but contributing to a wide variety of other conditions, from depression and diabetes to heart irregularities and impaired fertility. Researchers have now identified numerous mechanisms of harm, which explain how electromagnetic fields impact your cells and damages your DNA.

One such expert is Dr. Martin Blank, PhD, one of the most experienced researchers of the cellular and molecular effects of electromagnetic fields in the U.S. He gave an informative speech at the November 18, 2010 Commonwealth Club of California program, “The Health Effects of Electromagnetic Fields,” co-sponsored by ElectromagneticHealth.org. In it, he explained why your DNA, with its ‘coil of coils’ structure, is especially vulnerable to electromagnetic fields of all kinds.

These properties contribute to greater reactivity of DNA to electromagnetic fields than other tissues, making the long-term consequences of repeated microwave exposures to our genetic material of great concern. Dr. Blank is adamant when he says that there IS evidence of harm, and that the harm can be significant. He also points out that the science showing harmful effects has been peer-reviewed, published, and that the results have been replicated, evaluated and “judged by scientists capable of judging it.” I wrote an in-depth article about these findings back in January of last year. If you missed it, go ahead and review it now.

It’s worth remembering that the telecommunication industry is much larger than the medical industrial complex, and they have far more influence than the drug companies. They’re also mirroring many of the same tactics as the tobacco industry to peddle their wares. This includes attempting to discredit researchers who publish unfavorable cell phone studies.

As Dr. Davis shows in her lecture above, the results of any study can be accurately predicted by looking at its sponsorship. According to a review by Dr. Lai in 2008, the probability that a study will find “no effect” is two to three times higher in industry-funded studies, while independently-funded studies into the health effects of mobile technology are TWICE as likely to find a positive result.

So please, be aware that there is already robust scientific evidence that cell phones and other wireless devices pose significant health risks to all of us—especially to children and pregnant women. So while such findings are not being widely publicized as of yet, it makes sense to take action now to protect yourself and your children. You can help to minimize your exposure to electromagnetic radiation from cell phones and other wireless devices by heeding the following advice: