Resources for EMF Education and Protection

Home/Resources for EMF Education and Protection

Resources for EMF education and protection


In regard to the dangers of wireless radiation, many people will ask: “Where is the evidence?” This question arises because people rationalize their use of a toxic technology for convenience or they have not studied the latest clinical data. In addition, the harmful biological effects of wireless radiation are not immediately obvious (except to those sensitive to EMF), the effects are cumulative.

The biological effects of microwave radiation exposure accumulate over time. Thus, if one is not feeling any negative effects using their cell phone or living in a home with wireless devices, it is easier to justify their use. Health issues can and do manifest over a period of time. And since wireless radiation is invisible, it is difficult to track the origin of what is causing one’s health issues. When a person is not feeling well, experiencing brain fog, sleep disorders, headaches, etc., one usually does not realize these symptoms can be caused by the cellular tower down the street or the many wireless devices in their home!

Independent (not telecom industry paid), scientists, doctors and researchers around the world agree conclusively, wireless (microwave) radiation causes negative biological effects even at low levels of exposure. Anyone wanting clinical evidence of this may click the link below and watch these presentations by experts. 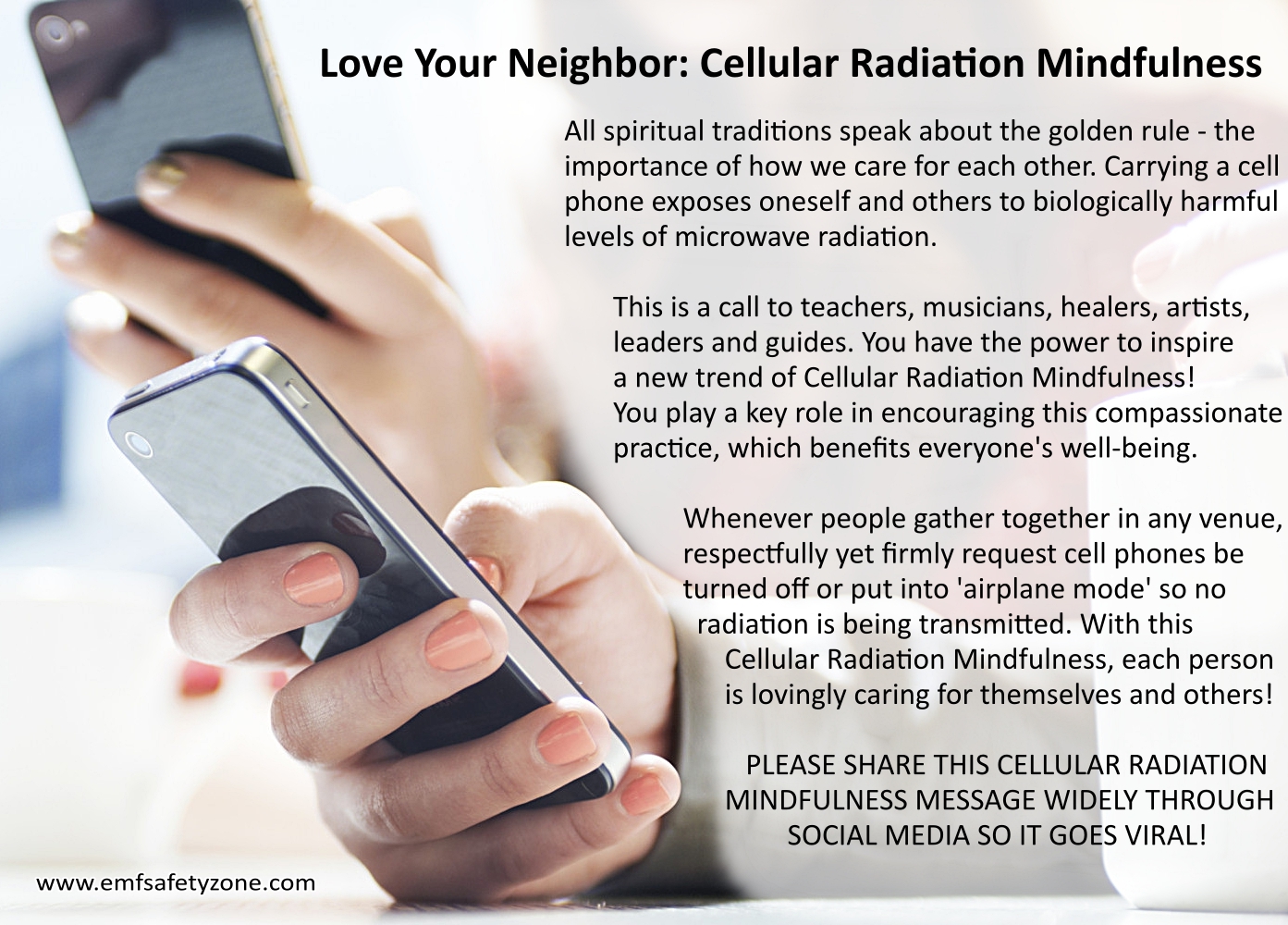 As most of us are aware, it is almost impossible to attend any music gathering, potluck, meditation or yoga group, movie or symposium without being exposed dangerous levels of microwave radiation emitting from everyone’s phones! This is not healthy for the owner of the phone nor for those around them, and this is not mutually caring and respectful.

Click on the banner above to save or print. This is an excellent message for websites, social media and as a full size flyer for posting to bulletin boards. This message is short, kind and inspiring. Please help it go viral! This message is a request to group leaders, teachers and guides in every field to inspire a new trend of Cellular Radiation Mindfulness.

Please download the banner and save it to your computer. Send this timely message out through your email lists, post the banner on social media sites, print it out and place it on local bulletin boards. Thanks!

An Independent Information Resource of Peer-Reviewed Research Into the Impacts of Electromagnetic Fields on Humans and Our Environment.

Evidence That Electromagnetic Radiation is Genotoxic by Dr. Neil Cherry

Simple EMF Suggestions for Creating a Safer Home and Office

The Radiation Poisoning of America

Electrical Sensitivity as an Emerging Illness

Protect Your Children from Radiation