What is EMF – How Does It Affect Us? 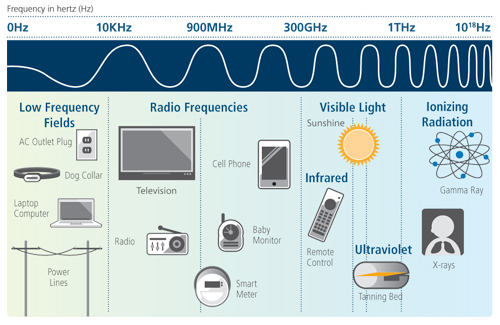 Understanding the basics of electromagnetic fields will assist you in learning to protect yourself and your family from the health dangers of EMF exposure. We are exposed to low frequency electric and magnetic fields from the wiring in the walls of our homes and offices and from electrical devices. We are also exposed to unhealthy levels of radio frequency (RF) radiation (also known as microwave radiation) from cell phones, cell towers, cordless phones, wireless internet modems and routers, wireless keyboards, mice, printers, gaming devices, baby monitors, and more. All of this EMF exposure is cumulative and detrimental to our health and well-being.

Electromagnetic fields are invisible, yet they have a very real effect upon the cells, tissues and organs of our bodies. Strong EMF in the radio frequency (RF) range (i.e. wireless devices) is also capable of damaging our DNA (this is known as genotoxicity). Along with creating unhealthy biological effects, EMF can also have a negative impact upon our psychology; our moods and mental states. Independent doctors, scientists and researchers from around the world are now warning people about the negative health effects of EMF and wireless radiation.

The proliferation of wireless devices in homes, offices, schools and businesses, exposing people to radio frequency / microwave radiation is now a global epidemic! Independent researchers, scientists and doctors around the world are warning people about the negative health effects of wireless radiation. Clinical studies showing wireless radiation to be ‘safe’ are most often funded or influenced by the telecommunications industry.

Please educate yourself and your family regarding the potential dangers of EMF. This education will lead to wiser choices in relation to the electronic and wireless devices you use in your home or office. Making wise choices in this way will help you maintain your health and vitality while living within the ‘matrix’ of the present wireless revolution and living inside of electrified homes!

What Is EMF? A More Classic View 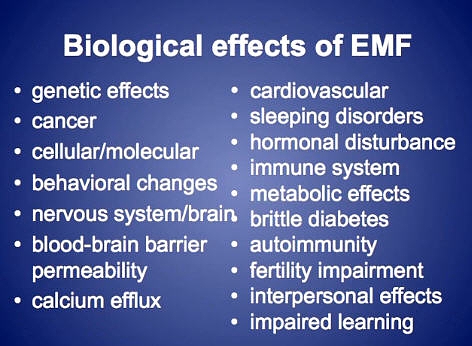 The proliferation of wireless devices in homes, offices, schools and businesses, exposing people to radio frequency / microwave radiation is now a global epidemic. Independent researchers, scientists and doctors around the world are warning people about the detrimental health effects of wireless radiation. Clinical studies that show wireless radiation to be ‘safe’ are most often funded or influenced by the telecommunications industry.

From a classical perspective in the history of electromagnetism, the electromagnetic field can be regarded as a smooth, continuous field, propagated in a wavelike manner; whereas from the perspective of quantum field theory, the field is seen as quantized, being composed of individual particles. (Wikipedia.org)

Electromagnetic radiation (EM radiation or EMR) is a fundamental phenomenon of electromagnetism, behaving as waves propagating through space, and as photon particles traveling through space, carrying radiant energy. In a vacuum, it propagates at a characteristic speed, the speed of light, normally in straight lines. EMR is emitted and absorbed by charged particles. As an electromagnetic wave, it has both electric and magnetic field components, which oscillate in a fixed relationship to one another, perpendicular to each other and perpendicular to the direction of energy and wave propagation.

In classical physics, EMR is considered to be produced when charged particles are accelerated by forces acting on them. Electrons are responsible for emission of most EMR because they have low mass, and therefore are easily accelerated by a variety of mechanisms. Quantum processes can also produce EMR, such as when atomic nuclei undergo gamma decay, and processes such as neutral pion decay.

EMR carries energy—sometimes called radiant energy—through space continuously away from the source (this is not true of the near-field part of the EM field). EMR also carries both momentum and angular momentum. These properties may all be imparted to matter with which it interacts. EMR is produced from other types of energy when created, and it is converted to other types of energy when it is destroyed. 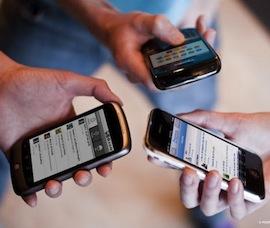 Most people are literally ‘addicted’ to using their cell phones and other wireless devices such as cordless phones and wireless internet modems. Because of this, our levels of radio frequency radiation exposure are increasing daily. It is most certain that anyone living in a condominium, apartment, or in close proximity in suburbs, is being exposed to RF radiation penetrating through one or more walls from neighbors’ wireless devices or smart meters.

The electromagnetic spectrum, in order of increasing frequency and decreasing wavelength, can be divided, for practical engineering purposes, into radio waves, microwaves, infrared radiation, visible light, ultraviolet radiation, X-rays and gamma rays. The eyes of various organisms sense a relatively small range of frequencies of EMR called the visible spectrum or light; what is visible depends somewhat on which species of organism is under consideration. Higher frequencies (shorter wavelengths) correspond to proportionately more energy carried by each photon, according to the well-known law E=hν, where E is the energy per photon, ν is the frequency carried by the photon, and h is Planck’s constant. For instance, a single gamma ray photon carries far more energy than a single photon of visible light.

The photon is the quantum of the electromagnetic interaction, and is the basic “unit” or constituent of all forms of EMR. The quantum nature of light becomes more apparent at high frequencies (thus high photon energy). Such photons behave more like particles than lower-frequency photons do.

Electromagnetic waves in free space must be solutions of Maxwell’s electromagnetic wave equation. Two main classes of solutions are known, namely plane waves and spherical waves. The plane waves may be viewed as the limiting case of spherical waves at a very large (ideally infinite) distance from the source. Both types of waves can have a waveform which is an arbitrary time function (so long as it is sufficiently differentiable to conform to the wave equation). As with any time function, this can be decomposed by means of Fourier analysis into its frequency spectrum, or individual sinusoidal components, each of which contains a single frequency, amplitude, and phase. Such a component wave is said to be monochromatic. A monochromatic electromagnetic wave can be characterized by its frequency or wavelength, its peak amplitude, its phase relative to some reference phase, its direction of propagation, and its polarization.

Electromagnetic radiation is associated with EM fields that are free to propagate themselves without the continuing influence of the moving charges that produced them, because they have achieved sufficient distance from those charges. Thus, EMR is sometimes referred to as the far field. In this language, the near field refers to EM fields near the charges and current that directly produced them, as for example with simple magnets and static electricity phenomena. In EMR, the magnetic and electric fields are each induced by changes in the other type of field, thus propagating itself as a wave. This close relationship assures that both types of fields in EMR stand in phase and in a fixed ratio of intensity to each other, with maxima and nodes in each found at the same places in space.

The effects of EMR upon biological systems (and also to many other chemical systems, under standard conditions) depend both upon the radiation’s power and frequency. For lower frequencies of EMR up to those of visible light (i.e., radio, microwave, infrared), the damage done to cells and also to many ordinary materials under such conditions is determined mainly by heating effects, and thus by the radiation power. By contrast, for higher frequency radiations at ultraviolet frequencies and above (i.e., X-rays and gamma rays) the damage to chemical materials and living cells by EMR is far larger than that done by simple heating, due to the ability of single photons in such high frequency EMR to damage individual molecules chemically. (Wikipedia.org)

An Independent Information Resource of Peer-Reviewed Research Into the Impacts of Electromagnetic Fields on Humans and Our Environment.

Evidence That Electromagnetic Radiation is Genotoxic by Dr. Neil Cherry

Simple EMF Suggestions for Creating a Safer Home and Office

The Radiation Poisoning of America

Electrical Sensitivity as an Emerging Illness

Protect Your Children from Radiation